An Alumnus Reflects on the Relationship That Would Spark His Career
Getting people to understand why science is important early is critical to the survival of our country now.

Vincent Tedjasaputra traces the start of his career to a single relationship: a bond he formed with his biology teacher in high school. He met Winnie Litten when he was 14 years old, just after his mom passed away from cancer. Her biology classes served as an outlet for his scientific curiosity, and Litten became a lifelong mentor to Tedjasaputra.

“For someone who had only a passing interest in science, I was lucky to have such a great science educator, someone whose care went beyond the subject matter,” Tedjasaputra says. Participating in the Amgen Biotech Experience (ABE) in Litten’s Oak Park High School class some 20 years ago gave Tedjasaputra a real-world, hands-on experience that would forever shape his path.

Now a AAAS Science and Technology Policy Fellow at the National Science Foundation (NSF), Tedjasaputra works on outreach and communications for the scientific community. He is especially focused on bringing more resources to small research programs, such as those at historically black colleges and universities. He also spends a lot of time working to help scientists communicate more effectively using storytelling.

In this role, Tedjasaputra has seen firsthand the critical role hands-on science programs play in shaping perceptions of science early in life, whether it’s views on vaccination or climate change. “Getting people to understand why science is important early is critical to the survival of our country now,” he says. “And one of the best ways is by touching science—putting your hand on a pipette touches your curiosity in a powerful way.”

Tedjasaputra remembers growing up in Southern California with Amgen nearby and thinking, Wow, this is real science happening in our local labs. Through ABE, he was then able to experience the science directly. Everything from donning gloves and goggles to mixing solutions and conducting the experiments brought the scientific process into sharp focus for him.

When he went to the University of California, San Diego, as an undergraduate, he performed the same recombination techniques he had learned in ABE. He remembers thinking, Didn’t everyone do this in high school?, before realizing just how special his ABE labs were.

As an undergraduate athlete, a hammer thrower, Tedjasaputra grew increasingly interested in physiology and nutrition and ended up pursuing a PhD in pulmonary physiology at the University of Alberta in Canada. “I loved the science, but I found that I enjoyed interacting with people more than the technical bench work,” he says. 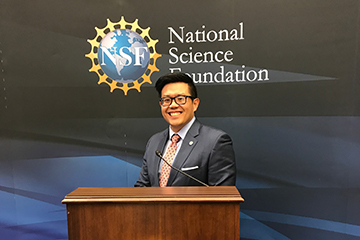 His current position with NSF is part of a 2-year program for PhDs in STEM that places scientists in all three branches of the federal government to serve as advisers and to experience various facets of scientific policy. Looking back on his time in high school, Tedjasaputra always reflects on his time with Litten and the importance of having a strong mentor who believes in you. He advises high school students now to be open to different opportunities and people, as you never know who will leave a lasting impact.