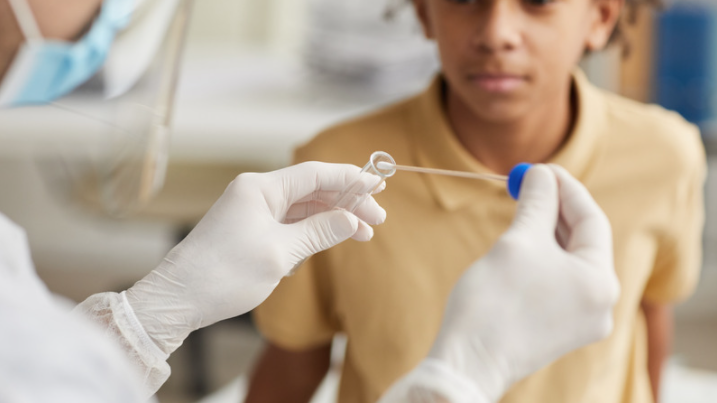 In 2019, scientists first became aware of a new virus that was spreading in China. The disease, soon recognized as a coronavirus (SARS-CoV-2), quickly traveled around the globe, infecting people in every country with the respiratory condition known as COVID-19. Schools and workplaces shut down, hospitalizations increased dramatically, and governments struggled to respond to the crisis. Almost immediately, researchers began to look for treatments for those affected. In addition to treatment, it became clear that two other strategies for managing this pandemic were necessary: prevention and testing. While it may not be the first thing you think of, testing is critical to pandemic control. Testing allows people—even those who are asymptomatic—to take precautions that will keep the disease from spreading. Testing also enables public health officials to track the spread of the disease and learn how it moves through a population, allowing them to adjust prevention strategies. COVID-19 testing was so critical that in April 2020, the US National Institutes of Health earmarked $1.5 billion (USD) for COVID test development, aiming to have millions of fast and accurate tests available by the end of summer.

The “gold standard” COVID test emerged quickly. The test uses polymerase chain reaction (PCR), which is a common laboratory technique used to analyze genetic material. In this case, it is used to determine if the virus is present. PCR harnesses naturally occurring enzymes and processes to make many copies of a specific piece of genetic material. Genetic samples are usually far too small to easily analyze, but PCR can quickly amplify (make many copies of) a tiny sample to create enough material for analysis.

PCR is separated into three phases: denaturation, annealing, and extension. During the denaturation phase, the double-stranded DNA is heated to separate it into two complementary strands. Then, two specifically- designed DNA sequences called primers attach or “anneal” to the ends of the region of interest, creating the starting point for the copying process. Finally, the enzyme taq polymerase copies the region of interest, doubling the amount of genetic material. This process repeats many times and ultimately creates several billion copies of the region of interest in the original sample. For more information and a visual explanation of the PCR process, check out this video from Khan Academy or this podcast from Genetics Unzipped. 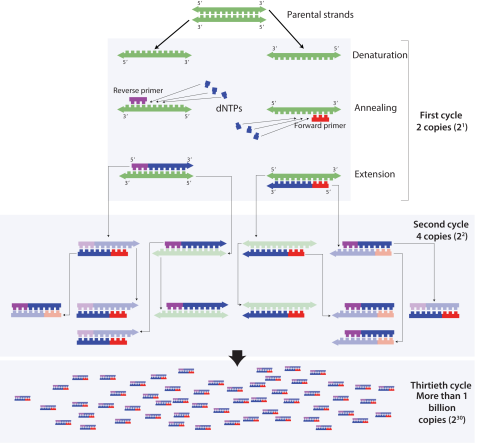 Researchers have long used PCR as a key step in DNA sequencing and forensic testing, but with the rise of the COVID-19 pandemic, a modified version of PCR has emerged as an indispensable tool for disease detection—quantitative PCR or “qPCR.” Like standard PCR, qPCR makes many copies of a specific region of interest (in this case, a small but unique portion of the genetic material in the SARS-CoV-2 virus). Unlike “normal” PCR, however, qPCR allows scientists to determine whether that specific region of interest is present using a fluorescent dye. 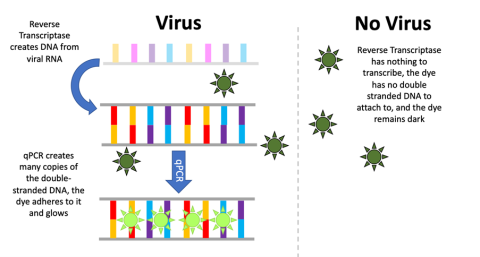 The fluorescent dye attaches only to double-stranded DNA (which will only be present if the PCR process has made copies of the viral genetic material). When the reaction cycle repeats, it will create more and more fluorescence. A computer tracks and records the level of fluorescence on a graph. If viral DNA is present, the sample will glow brighter and brighter. If the level of fluorescence surpasses a certain threshold, the patient is considered to have tested positive for the virus. If the sample contains no viral DNA, the reaction cannot proceed, the sample will remain dark, and the patient is considered to have tested negative.

While PCR testing is considered to be both more sensitive and more reliable than “rapid testing” for antigens, it does have some weaknesses. Access to PCR testing appointments is sometimes limited, testing can be expensive, and the turnaround time to receive results can vary by several days. In addition, despite the sensitivity of PCR testing, if a patient is tested quite early after being infected, there may not be enough viral genetic material in their sample for the level of fluorescence to surpass the threshold, even after many cycles of PCR. As the pandemic continues, it is likely that PCR testing will continue to play an important role, but should be part of a multi-pronged mitigation approach if it is to be effective.

To learn more about PCR and how it is used, check out the following resources: